In accordance with the enabling act of February 26, 1857, an election was held on June 1, 1857, at which Republican and Democratic delegates were elected to the constitutional convention. When these delegates assembled in St. Paul on July 13, 1857, to draft the Minnesota constitution, bitterness between the two parties was so intense that Republican delegates and Democratic delegates refused to meet in the same convention. As a result each party held separate sessions in different rooms of the first capitol building.

The political cleavage was so great that the two bodies never acted in joint meeting during the entire constitutional convention: July 13 to Aug. 29. The final work was done through a conference committee composed of five conferees from each of the conventions. The conferees, by reporting to and receiving advice from their respective conventions, were able to draft a constitution that would be acceptable to both bodies. On August 28, 1857, in spite of numerous protests by delegates, the report of the conference committee was adopted without amendment by both the Republican and Democratic conventions. 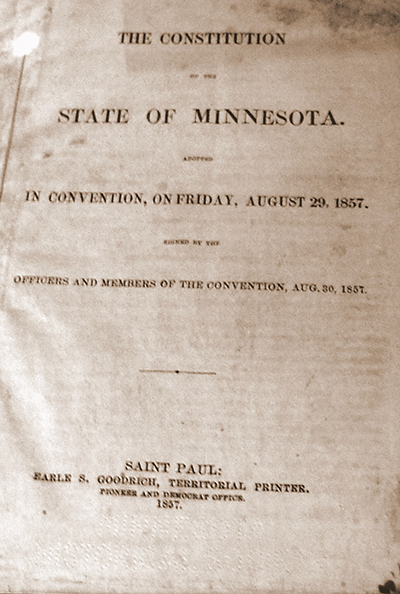 Cover of the first printing of the Minnesota Constitution, 1857

Thus, on the 29th day of August, after seven weeks of political dispute and disagreement, the two conventions adjourned when as many members as could bring themselves to do so signed the copy of the constitution enrolled for their particular convention.

A certified copy of the Democratic constitution was transmitted to the senate by the territorial secretary: a Democrat. This copy was attached to the bill for the admission of Minnesota into the union. However, when the bill was reported back from the senate, historians report that the Republican constitution was attached. In any event, there is substantial authority that both constitutions were before Congress when Minnesota was admitted to the union on May 11, 1858.

In reality, the constitution ratified by Congress was not the original constitution. At the election of October 13, 1857, in addition to voting on the constitution, the voters elected executive, legislative and judicial officers. The state officers were content to wait for the act of Congress before assuming office. But the legislature took a contrary view. It convened on December 3, 1857, on the theory that under the enabling act the statehood of Minnesota began when the voters approved the constitution. Even though this theory was incorrect, the legislature proceeded to enact laws, the effects of which have remained undisturbed by the courts.

The legislature in 1971 established a constitutional study commission to review the constitution and make recommendations to maintain its utility. After two years’ study, the commission recommended that an amendment restructuring the constitution for easy reference and rewriting it in modern language be prepared.