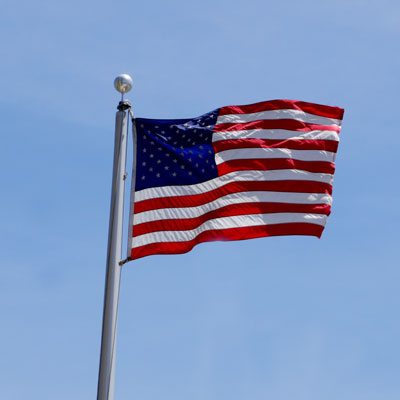 The Office of the Minnesota Secretary of State provides information and resources for citizens interested in flag etiquette—the protocol for handling and displaying the flag of the United States and other flags.

To request flag etiquette brochures for your organization, contact the office at 651-201-1324 or by email at secretary.state@state.mn.us.

History of the United States Flag

On June 14, 1777 the Continental Congress established an official flag for the new United States by passing the Flag Act:

"Resolved, That the flag of the United States be made of thirteen stripes, alternate red and white; that the union be thirteen stars, white in a blue field, representing a new Constellation."

The design of the flag continued to evolve throughout our nation's history. Read more at USFlag.org.

To learn more about flags and flag design, visit the North American Vexillological Association at NAVA.org.

The U.S. flag has 13 horizontal stripes—alternating seven red and six white—with the red stripes at top and bottom. The canton, or union of navy blue, occupies the upper left-hand quarter next to the staff and extends from the top to the lower edge of the fourth red stripe. The 50 stars in the blue union represent the number of states. The stars are arranged, with one point up, in nine horizontal rows. The following diagram provides flag terminology and gives official dimensions of the flag: Based on taking HOIST as 1, all other dimensions of the flag have a proportion as shown, regardless of variations in overall size. 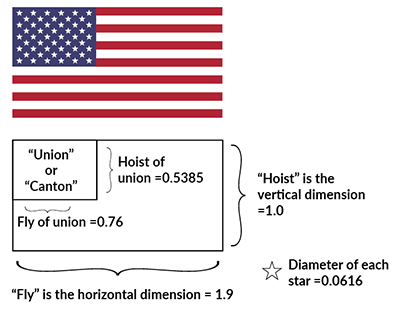 Minnesota's first state flag, adopted in 1893, had a ground of white on one side and light blue on the other, with the state seal in the center on both sides. The current flag was adopted in 1957--find more information about it on the Minnesota flag webpage.

The United States Code, Title 36 sets guidelines for display of and respect shown to the United States flag. Below are some of the guidelines. For a complete explanation, see USFlag.org or Congressional Resource Service [pdf].

For information regarding the laws and provisions related to flag etiquette in Minnesota see:

Minnesota's governor may order the United States flag or the Minnesota flag to be flown at half-staff on state property. At the Flags at Half-Staff webpage of the Governor's Office, you can sign up for notifications when such an order is issued.

Here are the rules for proper display and use of the U.S. flag, as established by generally accepted custom and by Public Law 829, approved by Congress as the “Federal Flag Code.”

More Rules for Display and Conduct