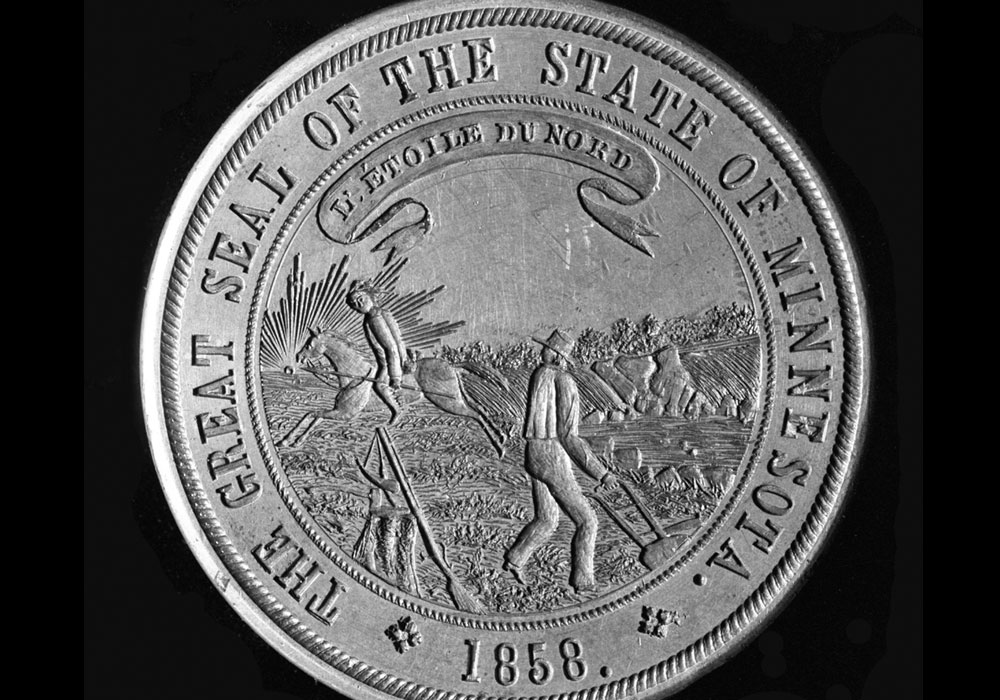 This symbol was adopted as the state seal in 1858.

The Minnesota Secretary of State is the keeper of the Great Seal of the State of Minnesota and affixes the seal to government documents to make them official. Just as people authenticate a document by signing their name to it, the state seal acts as the State’s signature. When Minnesota became a state on May 11, 1858, it did not have an official state seal—despite a constitutional requirement to have one.

Minnesota’s first secretary of state, Francis Baasen, wrote to Governor Henry Sibley requesting direction on the matter. Sibley authorized Bassen to use Minnesota’s previous territorial government’s seal. In the meantime, Sibley began making design changes and correcting errors discovered when the seal was cast in metal. He replaced a misspelled Latin motto, “Quo sursum velo videre,” which means “I want to see what lies beyond” with a French motto, “L’Étoile du Nord,” meaning “the Star of the North.” He also reversed the picture on the seal to depict the sun setting in the west instead of rising in the east. Around the seal design he placed the words, “The Great Seal of the State of Minnesota 1858.”

In 1861, the Legislature adopted the new design, making it the official state seal. In 1983, the Legislature altered the seal in an attempt to spell out specific design details more clearly in hopes of avoiding the wide variations that occurred in past artistic interpretations.

The Great Seal of the State of Minnesota is rich in symbolism. The sun, visible on the western horizon, signifies the flat plains covering much of the state. The cultivated ground and plow symbolize the importance of agriculture. The Mississippi River and St. Anthony Falls are depicted to note the importance of Minnesota’s natural resources for trade and commerce. The three pine trees represent the state tree, the Red or Norway pine, and the three great pine regions of the state including the St. Croix, Mississippi, and Lake Superior. The tree stump symbolizes the importance of Minnesota’s timber industry. The American Indian on horseback represents the great American Indian heritage of the state while the horse, spear, axe, rifle, and plow represent important tools that were used for hunting and labor.

A 1984 attorney general’s interpretation of Minnesota Statutes addressed the issue of private use of the state seal:

There are a number of consumer protection statutes that could conceivably prohibit the use of the state seal if it is used to misrepresent the nature of a business (Minnesota Statute 325D.12) or if a person in the course of his business, vocation or occupation engages in any conduct which creates a likelihood of confusion or of misunderstanding (Minnesota Statute 325D.44(12)). In addition, in some circumstances, reproduction of the seal may constitute aggravated forgery. See Minnesota Statute 609.626, subd. 1(2). It provides that "whoever, with intent to defraud, falsely makes or alters [an official seal] so that it purports to have been made by another or by himself under an assumed or fictitious name...or by authority of one who did not give such authority, is guilty of aggravated forgery...”