“Minnesota’s sports heroes and legends are leading the effort to vote early,” said Secretary Simon. “These pros know how hard it is to become a champion, much less to repeat over and again. Team Minnesota was tops in the nation in voter turnout in 2016. The Lynx aren’t the only dynasty in Minnesota – we can all share in another championship for voter participation in 2018.”

For nine elections in a row Minnesota was number one in the country in voter turnout. In 2014, Minnesota fell to number six. But in 2016, Minnesotans responded to the challenge and returned to #1 in the county for voter participation. 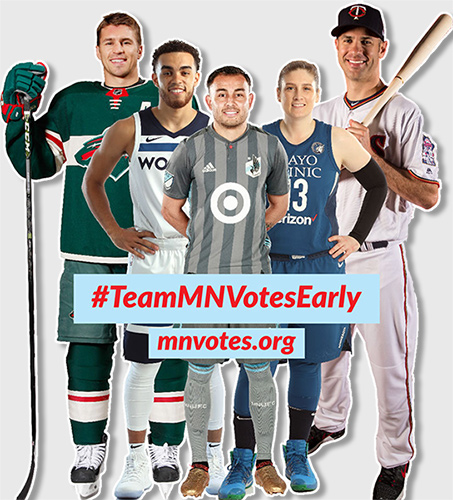 Secretary Simon encourages all early voters to take a selfie with Team Minnesota and share your enthusiasm for early voting by posting to social media using the hashtag #TeamMNVotesEarly.

HOW TO REQUEST AN ABSENTEE BALLOT

Minnesota voters can request an absentee ballot quickly and easily at mnvotes.org using the online application.

Voters can request an absentee ballot even if they are not registered to vote — a voter registration application will be provided with their ballot.

Voting Absentee by Mail: Minnesotans voting absentee by mail must make sure their ballot is returned on or before the November 6 General Election. Ballots returned after November 6 will not be counted.

MILITARY AND OVERSEAS VOTERS
Minnesotans serving in the military or living abroad—temporarily or indefinitely—can have an absentee ballot sent to them anywhere in the world. Learn more here: http://bit.ly/1Yybb1v.

WHAT’S ON MY BALLOT?

Minnesotans can use “My Ballot” to view their sample ballot and find links to candidates’ websites.

Beginning September 21, upon requesting an absentee ballot, voters may check the status of their ballot, such as when it was mailed, and if their completed ballot was received and accepted by their local elections office.

The vote-from-home and early voting period for all Federal, State, Judicial, and County Offices runs from September 21, 2018, until November 5, 2018. In-person Election Day voting will take place throughout Minnesota on Tuesday, November 6, 2018.

Anyone can go to mnvotes.org to check their eligibility, register to vote, or to locate their county or city election office.

If you're interested in ordering a Team MN standee to promote voting, contact the Secretary of State's office at 651-201-1324.