SAINT PAUL – Minnesota voters since 2014 have had the option of vote from home, or “no-excuse absentee” voting. All county election offices throughout the state also offer in-person absentee voting, commonly referred to as “early voting.” Since 2014, Minnesota voters have increasingly used vote from home and early in-person voting to cast their ballots. Voting for the 2018 statewide general election began on September 21, 2018. As of this morning, at least 539,806 absentee ballots have been accepted – just shy of the 2016 presidential election pace for absentee balloting.

“Early voter participation in Minnesota is at record levels,’” said Secretary of State Steve Simon. “With less than 36 hours remaining in the 2018 election, Minnesotans are on pace to hold our #1 title for voting participation. You still have time to vote – get to an early vote center today or your polling place tomorrow. You can register to vote tomorrow if you have not yet registered. Now is the time to find that last bit of energy and sprint through the finish line – let’s go Team MN! Make an Election Day plan to be a voter.”

As of Monday, November 5, 2018, at least 539,806 absentee ballots have been accepted by county election officials. The rate of absentee ballot requests is an increase of 129 percent over the total number of absentee votes case in the 2014 election (last statewide non-presidential election) calendar. 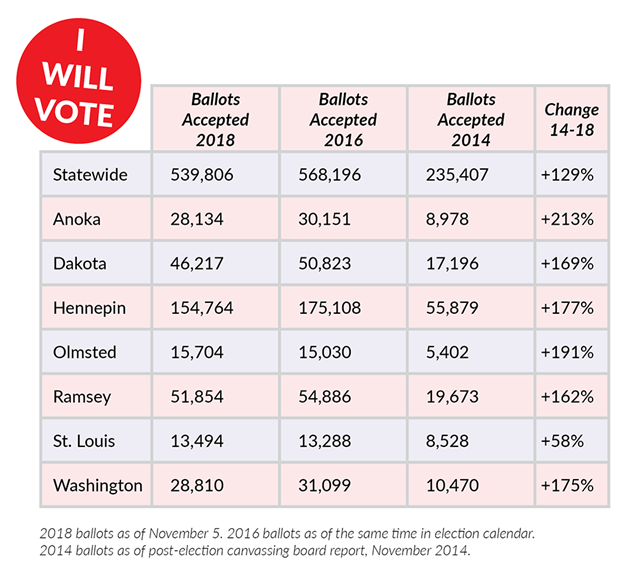