SAINT PAUL — Today, Secretary of State Steve Simon announced the first round of results for Minnesota Students Vote 2016, the first statewide mock election for high school students. Over 77,000 students from 213 high schools so far have cast a mock ballot for U.S. President.

The results show, as of Oct. 31, Donald J. Trump and Michael R. Pence (Republican) narrowly defeating Hillary Clinton and Tim Kaine (Democratic-Farmer-Labor) by about two percent—34.97% to 32.89%. The Trump/Pence ticket received 26,930 votes and the Clinton/Kaine ticket received 25,333 votes. Additional high schools have scheduled their mock election between now and Election Day (November 8), and results will be updated at that time. 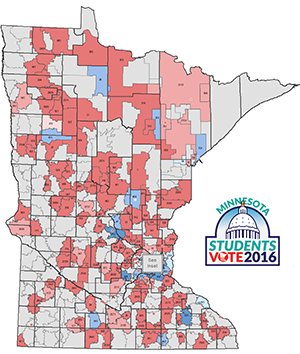 “The Students Vote 2016 initiative is about getting good habits started early and this year tens of thousands of young and soon-to-be voters had the opportunity to get invaluable, hands-on experience with the electoral process,” said Secretary Simon. “I’m especially grateful to the hundreds of schools, administrators, teachers and students who helped administer the mock election, and the over 77,000 students who made their voices heard.”

High schools were required to report results by 5 p.m. on Wednesday, Oct. 26 for inclusion in the first round of results. Each high school was given the ability to decide how and where the voting took place, whether in one central location, over the lunch hour, in individual classrooms, or something entirely different.

What teachers, administrators and students are saying about Students Vote 2016: