Students throughout the state take part in 'Minnesota Students Vote 2016'

Students throughout the state are taking part in Minnesota Students Vote 2016, the first ever statewide mock election for high school students.

Over 280 high schools throughout the state have signed up to participate. Students will cast a mock ballot for U.S. President and get hands-on experience with the electoral process. Each school has the ability to decide how and where the voting takes place, whether it’s in one central location, over the lunch hour, in individual classrooms, or something entirely different. Statewide results for the Students Vote 2016 mock election are scheduled to be announced on November 1—one week before Election Day. 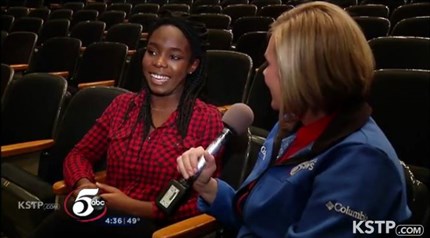 As students trickled into Century High School Tuesday morning, they were greeted by voting booths.

While the talk of selecting our next president has seemingly been relentless the last few months, the group of high school got to make their pick for our country's top office a few weeks early.

That's because high schools like Century and John Marshall are joining about 280 high schools throughout the state in the first statewide mock election, sponsored by the Minnesota Secretary of State's Office. Two weeks before voters will head to the polls to cast their vote on Nov. 8, the mock election is an an attempt to familiarize students with the voting process and casting a ballot.

It's about "getting good habits started early," said Secretary of State Steve Simon in a news release.

"I think it's awesome because they're learning the actual process instead of just us talking about it, they actually get to see how it works," said Kathryn Gardner, a Century social studies teacher. [Read more]

HIBBING — The students have spoken.

This year, 282 high schools throughout the state are participating in the first-ever statewide mock election for students, according to the Minnesota Secretary of State’s office.

WILLMAR — Donald Trump got the most votes in a mock presidential election Tuesday at Willmar Senior High School, but Hillary Clinton was fewer than 30 votes behind.

About 40 percent of the school's 1,200 students participated in the election, part of a first-ever statewide mock election in the state's high schools. Statewide, 282 high schools across the state are participating in Minnesota Students Vote 2016, an effort of the secretary of state's office. Statewide results will be released Nov. 1.

Individual schools could choose how they wanted to conduct the election. In Willmar, students visited a polling station outside the cafeteria during their lunch periods.

During the school's four lunch periods, 514 students cast ballots. Trump was at the top with 207 votes, to Clinton's 179 votes. Others receiving votes included 41 for Libertarian Party candidate Gary Johnson and 17 for Dan Vacek, the candidate for the Legal Marijuana Now Party. Thirty-six ballots had write-in votes, and all other candidates on the ballot polled in single digits. [Read More]