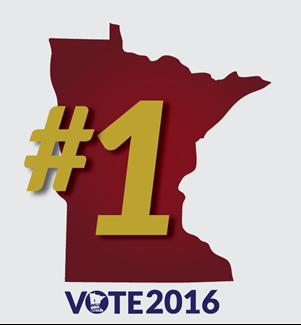 Minnesota has consistently ranked number one in highest voter turnout for the past nine presidential elections. But in the 2014 election, Minnesota was demoted to number six.

Secretary of State Steve Simon wants to change that, and make Minnesota number one in the nation for voter turnout — building on the big turnout during the recent caucuses. He is rolling out initiatives that include a pledge-to-vote form, outreach training, and mock elections in high schools and colleges, among others goals.

“I think it’s important because our vote is our voice, and the more people vote and become part of that chorus, the better it is [and] the more confident we can be in the election,” said Simon in an interview Monday.

Since the program is so widespread, registering over five million Minnesotans can be a daunting task. So Simon is asking for help from businesses, nonprofits, service providers and other organizations to donate their time to register eligible voters.

“What we can do is empower others around the state– nonprofits, companies, service providers and others– to do this. It’s really a team effort and not just our office,” Simon said.

Organizations can sign up for the Pledge and Registration program– a nonpartisan participation effort that encourages community members to fill out a pledge to vote form.

Simon’s office hopes to both train and register people in the Pledge and Reg program and confirm their vote in the upcoming election, all while getting the local community engaged in the presidential election.

Simon, who has served Minnesota as secretary of state for 14 months, will fund the program through his office exclusively.

Aspects of Simon’s voter turnout program have been used in California and in Iowa high schools, where students were free to host mock elections to practice what going to a real election is like.

“Its really been a great way to get good habits started early, which is the name of the game for our youngest voters,” Simon said. The high school’s mock elections started last week on Super Tuesday.

College students will have a statewide voter registration competition, and the campus that registers the most students for the presidential election will win a traveling trophy.

Minnesota voters can also visit the Office of the Secretary of State’s Minnesota Votes website, making the process to register “as easy as possible.”

With 2016 being an open-seat presidential election year, Simon predicts that more attention will be focused on voter registration programs nationwide, and that more people will go out and vote.

Some other initiatives include making fact sheets and other voter materials accessible to other languages, including Mandarin, Oromo, Amharic, Laotian, and Cambodian. Currently, these forms are in Hmong, Somali, Spanish, Russian, Vietnamese, and English.

Larry Jacobs, a University of Minnesota political scientist, said in an interview that Secretary Simon is going back to an old playbook move where the office can “instill the habit of being a citizen.”