His message to students? You have the power to steer the ship and help make decisions about who will represent you in Minnesota and nationally. 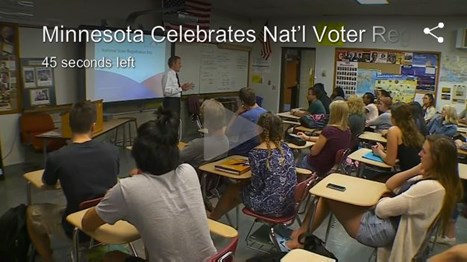 MINNEAPOLIS (WCCO) — As things continue to heat up and intensify in the race for the White House, candidates and state officials want everyone who qualifies to exercise their right to vote.

On Tuesday, volunteers hit the streets for National Voter Registration Day. The day is all about raising awareness, and is a partnership of a bunch of different civic and political organizations.

There are about 700,000 Minnesotans who could be registered to vote but aren’t, according to the Secretary of State.

“People don’t have a ride to the polls, people who find the whole process difficult, people who have busy, unconventional schedules, and then there’s a whole other kind of barrier, which is a barrier of attitudes, people who don’t want to vote. They don’t think it matters,” Simon said.

Earlier Tuesday morning, Simon visited Como Park Senior High School, where he spoke and took questions from almost 50 students who are in the AP government and politics class.

They get college credit for the class and Simon also encouraged them to get active and registered to vote.

He told them they have the power to steer the ship and help make decisions about who will represent us on the national stage and locally.

The class Simon spoke to had about three students who are 18 now and most of them will be the same age by the presidential election.

This is the fourth year for National Voters Registration Day, but it’s the first year Minnesota has participated.

Minnesota does have same-day registration at the polls.