"I strongly believe we should be doing everything we can to get good habits started early with young Minnesotans, and this outreach effort is an important step in that direction," Secretary of State Steve Simon said.

Today, the Rochester Post-Bulletin praised Secretary Simon for his work to reach out to young voters and help decrease wait times to register on Election Day.

Last month, Secretary Simon announced that his office will be reaching out to nearly 100,000 unregistered Minnesota voters with a monthly mailing encouraging them to register to vote. The mailing will be sent to Minnesotans who recently turned 18 years old, as well as those of voting age who recently received a Minnesota’s driver’s license.

Check out the editorial below.

Rochester Post-Bulletin: Our View: New voter birthday wishes have merit
By Editorial Board, 2/3/16

The state's youngest voters should be watching the mail. 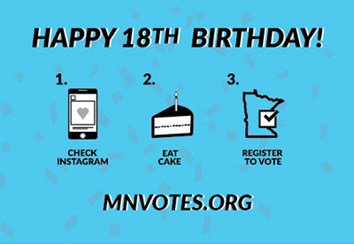 The Minnesota Secretary of State's Office sent out thousands of birthday reminders last month to 18-year-olds who will be eligible to cast their first votes in the Aug. 9 primary elections or the Nov. 8 general election, not to mention participate in next month's statewide caucuses in the presidential election.

Within nine months, the office expects to mail nearly 100,000 unregistered voters to encourage them to sign up. While most will be 18-year-olds who recently have earned the privilege, the program also will send notices to anyone of voting age that receives a state driver's license or identification card with information that doesn't match voting records.

"I strongly believe we should be doing everything we can to get good habits started early with young Minnesotans, and this outreach effort is an important step in that direction," Secretary of State Steve Simon said.

It's an important and worthwhile message to send.

While Election Day registration is available at the polls for unregistered voters, taking care of the paperwork early will help speed the process for the individual voter and decrease the potential of lines during peak hours. With a presidential race heating up and contests possible in all state Senate and House races, we expect the number of voters to be high in November.

Simon noted the effort goes beyond reducing lines and wait times, however. "By contacting voters on an ongoing basis, we can help ease the volume of voter registration applications received by counties in the last few weeks leading up to the election," he said.

We appreciate the effort to streamline the process and help ensure more young voters are on the rolls.

While much has been said about young voices weighing in on the presidential election in the national media, not enough has been done about encouraging those voices to make their marks on November ballots. While most would assume the two thoughts go hand-in-hand, too often the follow-through is left out of the picture.

That's part of the reason Minnesota became an official Electronic Registration Information Center member through 2014 legislation, joining Washington, D.C., and 12 other states in a consortium aimed at improving accuracy of state voter rolls and increasing outreach to unregistered voters. It's that membership that provides the data driving the new young voter recruitment effort.

Ultimately, it's all key to making sure every vote counts and every potential voter has the opportunity to be heard.