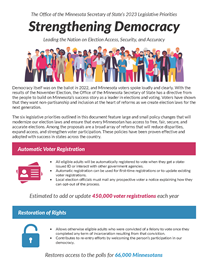 SAINT PAUL - Secretary of State Steve Simon today announced his top legislative priorities to Strengthen Democracy that will expand access for voters, increase security, and maintain the highest standard of accuracy in our elections.

“In 2022, Minnesotans spoke loudly and clearly – they want us to build on Minnesota’s success story as a leader in elections and voting,” said Secretary Simon. “The proposals I’m bringing forward to legislators are the best practices for democracy tested in red and blue states around the country.”

These legislative priorities feature policy changes that will modernize our election laws and ensure that every Minnesotan has access to elections that are free, fair, secure, and accurate. Among the proposals are a broad array of reforms that will also reduce disparities, expand access, and strengthen voter participation.

Minnesota is a leader in voter participation, but there is more work to be done to ensure every eligible voter has access to the polls. As of November 2022, more than 575,000 Minnesotans were eligible to vote but not registered. Automatic voter registration ensures eligible individuals are automatically registered to vote when providing information to certain government agencies, such as when applying for a driver’s license.

“Automatic voter registration is a win-win-win for Minnesota,” said Secretary Simon. “It would allow us to expand voting access and improve the accuracy of our voting rosters while saving taxpayer dollars.”

Automatic Voter Registration would use information gathered from the government agency that an eligible voter interacted with to create a new voter record or update an existing registration. It is estimated nearly 450,000 voter registrations would be added or updated each year in the Statewide Voter Registration System as a result of this policy. Prospective voters would still have an opportunity to opt out of this process.

If enacted, Minnesota would join 25 other states - including Georgia, Oregon, and Virginia - and the District of Columbia in implementing Automatic Voter Registration.

Nearly 66,000 Minnesotans who have left prison behind are unable to cast a vote in our democracy. Secretary of State Steve Simon is calling for the legislature to restore voting rights to individuals convicted of a felony once they have completed any term of incarceration resulting from that conviction.

“Right now, we have a law that says it is safe enough for a person to live in our community but too dangerous for them to vote,” said Secretary Simon. “It is long past time for legislators to change this unfair law to welcome Minnesotans working to rebuild their lives back into our democracy.”

In addition to supporting re-entry efforts, this policy would aid in elections administration by setting a clear standard for when someone’s rights are restored.

Twenty-one other states, including Colorado, Montana, and North Dakota, currently allow for voting rights to be automatically restored after release from incarceration.

Each statewide election requires nearly 30,000 Minnesotans to step up for their communities and uphold democracy by serving as election workers. Unfortunately, the current political climate has created dangerous conditions for those public servants.

Secretary Simon is calling on legislators to protect our election workers by passing enhanced restrictions on activities and behaviors that can put them in harm's way. The proposed policy would prohibit:

Violations of this law would be subject to criminal penalties and a civil enforcement process.

In 2022, four other states passed legislation to protect election workers.

Preregistration for 16-and 17-year-olds

Inviting youth into our democracy early can increase the likelihood they become lifelong voters. By allowing preregistration for 16- and 17-year-old Minnesotans who are otherwise eligible to vote, we can encourage voting participation from the moment a person turns 18.

Secretary Simon’s proposal would allow 16- and 17-year-olds to complete registration paperwork before their 18th birthday. Teens would be listed as “pending” until they reach adulthood when they would automatically appear on their polling place roster on Election Day.

Currently, 15 other states and the District of Columbia allow 16- and 17-year-olds to preregister to vote.

Elections administration is an evolving task that requires continuous investment in security. Congress has responded by periodically providing resources through the Help America Vote Act (HAVA). Unfortunately, legislators in recent years have successfully interfered with those federal election security appropriations by holding them hostage to other political demands. Secretary Simon is calling for lawmakers to support the Office’s efforts to ensure the prompt use of federal Help America Vote Act funds.

This law would bring Minnesota in line with all other states that are allowed to use the funds for their full federal purpose of securing, modernizing, and enhancing elections.

In 2020, local governments across Minnesota conducted an additional election in the form of the Presidential Nominating Primary – the first such binding election in a generation. The legislature appropriated money to local government for the administration of that election, but the reimbursement structure left many local governments shouldering the burden of unexpected costs.

Secretary Simon is calling for the legislature to remove burdens from counties, cities, and townships by fully reimbursing administrators for the actual costs of administering this statewide election. 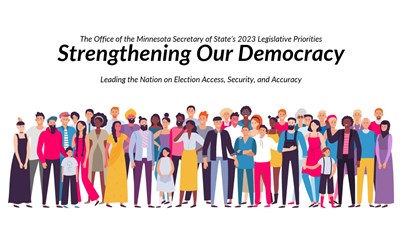 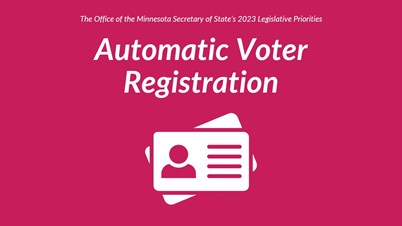 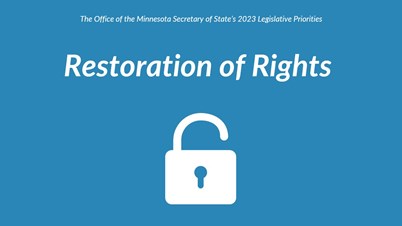 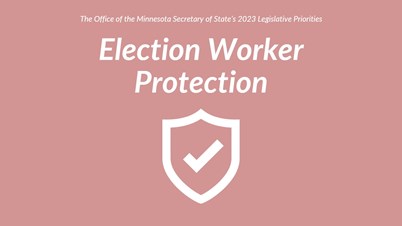 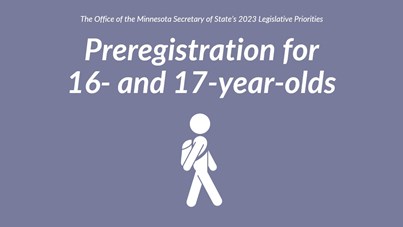