May 24, 2019
Secretary of State Simon Presents NASS Medallion Award to Pamela Hoopes for Years of Service to Disability Community

SAINT PAUL – Secretary of State Steve Simon on Wednesday, May 22, 2019, presented a NASS Medallion Award to Pamela Hoopes, retiring Deputy Director of the Disability Law Center and member of the Secretary of State’s Disability Advisory Committee, for her advocacy on behalf of voters with disabilities and her work to ensure that all Minnesotans can participate in their democracy.

“I am truly honored to present Pamela Hoopes with a NASS medallion award,” said Secretary Simon. “It is the central mission of my office to make voting as easy as possible for all eligible Minnesotans. Pam’s work in furthering this mission is unparalleled and all Minnesotans owe her a debt of gratitude for strengthening access to voting. On behalf of myself and the Office of the Secretary of State, I wish Pam well in retirement and thank her for her years of service to Minnesota voters and the entire disability community.”

Pamela Hoopes has been an advocate for voters with disabilities in the courts, at the legislature, and in the community. In her role at the Disability Law Center, Ms. Hoopes has lead trainings and advocacy campaigns around increasing access to voting for Minnesotans with disabilities. Her leadership has improved the voting experience for people with disabilities, and she has served as an invaluable resource to the Office of Secretary of State. 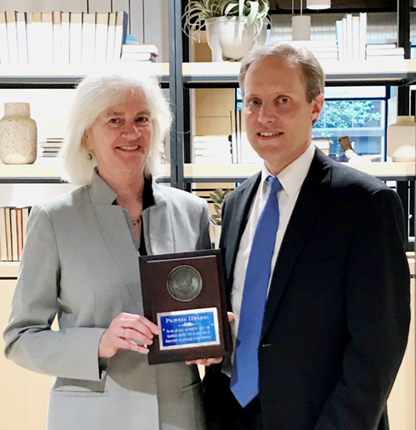 About the NASS Medallion Award

The NASS Medallion Award was created to honor individuals, groups or organizations with an established record of promoting the goals of NASS in one or more of the following areas:

• Elections, with special emphasis on voter education and participation
• Civic education, including the teaching, promotion and study of this subject
• Service to state government, specifically as it relates to the duties of the office of the Secretary of State
• A commitment to giving – a business or individual whose philanthropic contributions have significantly enhanced the quality of life in a local or regional area within a state, or within an entire state