August 17, 2016
Students will cast a mock ballot for who they think should be our next president

This fall, high school students across the state will vote for who they think should be our next president — and get hands-on experience with the electoral process. Results will be announced shortly before Election Day by the Office of the Minnesota Secretary of State.

For a complete list of high schools that have signed up, click here (scroll to the bottom of the page).

“As we near Election Day on November 8, and with the beginning of the school year right around the corner, young and soon-to-be voters will begin preparing for their next big responsibility in life: casting a ballot,” said Secretary Simon. “Minnesota Students Vote 2016 is about getting good habits started early and I’m excited that more than half of high schools throughout the state—from Caledonia to Thief River Falls and Fairmont to Grand Marais—have already signed up to participate.”

“In Minnesota, registering to vote and voting has never been easier,” said Jeffrey McGonigal, Associate Superintendent for high schools for the Anoka-Hennepin School District. “We believe by having students participate in Minnesota Students Vote 2016 we will help young adults become familiar with the process and confident they can vote when the time comes.” 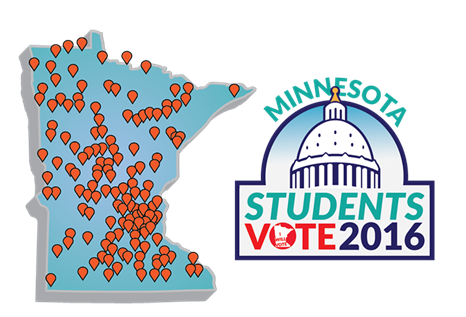 Minnesota Students Vote 2016 is designed to give schools and teachers both flexibility and support. Each school has the ability to decide how and where the voting takes place, whether it’s in one central location, over the lunch hour, in individual classrooms, or something entirely different. Schools can also add curriculum to the program or do the mock election as a stand-alone activity.

In September, schools will receive everything they need from the Office of the Minnesota Secretary of State, including mock election ballots, lesson plans that teachers may use, “I voted” stickers, and creative ideas for making the election a success.