Sec. Simon: “Good habits start early - the young voters of today are the seasoned voters of tomorrow. No metric is more important to the future of our state than the participation of young people in our political process.”

SAINT PAUL – When it comes to elections, Minnesotans are consistently the best voters in the United States, routinely ranking #1 for turnout. For the 2018 Statewide General Election, 64.25 percent of eligible voters cast a ballot. A recent study from The Center for Information & Research on Civil Learning and Engagement (CIRCLE) at Tufts University dug deeper into voter participation rates across the country and found that young voters in Minnesota also voted in 2018 at the highest rates in the country, coming in at 43.7 percent participation. See more from the CIRCLE study here.

“Empowering young people to vote is one of my most important responsibilities,” said Secretary of State Steve Simon. “We have a great tradition in Minnesota of voting in high numbers, but that tradition will only continue if we pass it on to the next generation. Good habits start early – the young voters of today are the seasoned voters of tomorrow. No metric is more important to the future of our state than the participation of young people in our political process. I am so proud of all Minnesotans for exercising their right to vote, but I am especially enthusiastic to see young Minnesotans embracing their political power.”

Secretary of State Simon has made nonpartisan student and youth outreach a priority. Every two years, the statewide “Students Vote” program supports mock elections at hundreds of high schools with organizing outlines, materials, realistic sample ballots, and articles. Students Vote exposes students to the process and realistic experience of elections.

The Secretary’s office also works with nonprofit organizations to train volunteers in voter registration at the state’s high schools, as well as providing ongoing resources to the teachers in areas like voting and civic engagement. These programs teach young Minnesotans a sense of the responsibility and power they have as voters.

Finally, the office works with other nonpartisan organizations to galvanize youth participation in our elections and leadership in civic life.

“A youth wave swept across Minnesota,” said Mike Dean Executive Director of LeadMN - College Students Connecting for Change. “The 2018 election is proof that young people want to have their voices heard.” 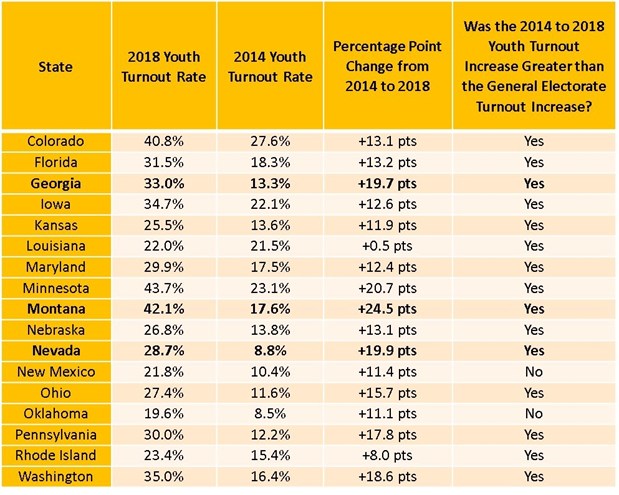 Courtesy of CIRCLE at Tufts University

CIRCLE focuses on young people in the United States, especially those who are marginalized or disadvantaged in political life. CIRCLE’s scholarly research informs policy and practice for healthier youth development and a better democracy. CIRCLE is based at the Jonathan M. Tisch College of Civic Life at Tufts University.